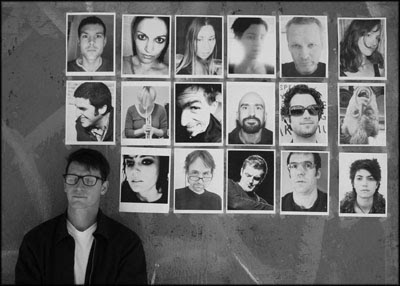 Surplus 1980 - Relapse In Response by moestaiano1

My description of Moe! Staiano in this Coilhouse post celebrating Viggie and other EPIC DRUMMERS):

“Dada Percussionist” Moe! Staiano is that proverbial storm-in-teacup; a spring-loaded, anarchic sprite whose wildly improvisational style summons the spirits of Einsturzende Neubauten and Raymond Scott in equal measure. Spontaneous, mischievous, and always in earnest, Moe! is one of the most delightful live performers around. You’re never quite sure what’s coming next, but you know it’s going to be FUN.

Considering who he is and what he's trying to achieve artistically, Moe! has long deserved a more fully fledged writeup from me. With mere days left on a wonderful Kickstarter project that hasn't quite reached its funding goal, now's the time.

The first blip of Moe! appeared on my radar around 2001: he was touring through NYC as a member Sleepytime Gorilla Museum, and his frenetic energy, sharp intellect, and feral performance instincts were a revelation to watch. Over the past decade, the Oakland-based experimental drummer, percussionist and composer has continued to enrapture audiences worldwide with his strange and beautiful approach to noisemaking.

As his Wiki states, Moe! works in a "variety of found sounds and prepared trap set as well as massive orchestra conductions of his own scored compositions." Here's some edited documentation of one of his huge group pieces, "Death of a Piano":

Over the past year, Moe! has been working feverishly on his Surplus 1980 recordings.

"[A project that] rose from the ashes of my old former band, Mute Socialite, which split up in 2009. It is a collection of songs that were former ideas that were meant to be used for Mute Socialite, but never really made it, as well as three cover songs."

"Surplus 1980 is a post-punk band of a rotating line up of some fine musicians*, many extending from great bands to be heard on this project including members from the Ex, Sleepytime Gorilla Museum, and Faun Fables, among others, including Mute Socialite. The album in its entirety has been recorded by Dan Rathbun and is completed and ready to be pressed for a limited edition vinyl LP and CD run. The funds to complete the release are the only thing needed to get it done."

The funds raised for Surplus 1980 will be used to press the LP (a gorgeously designed limited run of 250 copies, with 100 on colored vinyl) and additionally be pressed on CD ("I still believe in CD's", insists Moe) as well as a download coupon. All funds will go 100% into this pressing. Any additional funds raised will be used for the next studio time for recording the next album.

*Full disclosure: along with a gobsmackingly awesome roster of other musicians, I am featured on this record. It would really thrill me to see this unique, inspired material get the lavish DIY print run it so richly deserves. Please make with the Kickstarter clickies if you love frenzied, toe-tapping post-punk joyfulness as much as I do.
Posted by Theremina at 9:39 PM