The Marvelous Misadventures of Flapjack, Vol. I 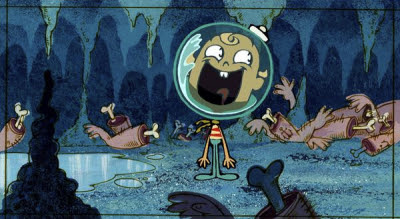 A while back, my talented chum Dan Cantrell landed a gig as the score composer for one of Cartoon Network's most popular new animated children's shows, and enlisted me to play violin. The Marvelous Misadventures of Flapjack is the cracked brainchild of Thurop Van Orman (previously a writer for Powerpuff Girls). I'm at a loss to describe Thurop's vision properly, but if you were to picture Ren & Stimpy and Spongebob Squarepants style shenanigans unfolding in a beautifully demented watercolor Treasure Island setting, you wouldn't be too far wrong. 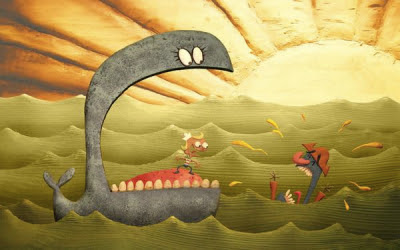 Flapjack is an innocent young cuss with an unquenchable thirst for adventure on the high seas. He's being raised by a somewhat overprotective blue whale named Bubbie, and his best friend/partner in crime is a scraggly, no-pants-wearin' pirate with two peg legs who goes by Captain K'nuckles. Hilarity and high jinks ensue.

In addition to being gorgeously drawn and painted, Flapjack is rife with non sequitur, uncomfortable silence and gross-out humor, so I thought you perverts might appreciate a heads up. We've been working on --and giggling over-- this weirdness for months now. (Wish I could show you the Tentacular Lovecraftian Horror episode. So warped.) 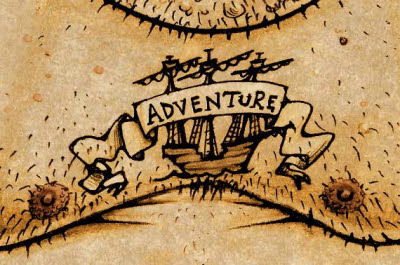 Nothing says quality children's programming quite like a pair of hairy, floppy, tattooed man teats. Unless it's fart jokes. Flapjack has plenty of both.

The first season of Flapjack will become available on DVD on Sept 15th. Folks with children they'd like to irrevocably warp, as well as young-at-heart types with a hankering for "ADVENTURRRRE!!!" are highly encouraged to pick it up.
Posted by Theremina at 6:37 PM